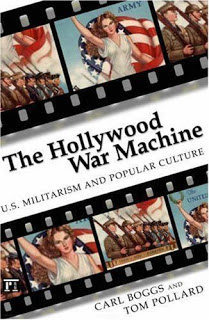 from al-jazeera: War is hell, but for Hollywood it has been a Godsend, providing the perfect dramatic setting against which courageous heroes win the hearts & minds of the movie going public. The Pentagon recognises the power of these celluloid dreams & encourages Hollywood to create heroic myths; to rewrite history to suit its own strategy & as a recruiting tool to provide a steady flow of willing young patriots for its wars. What does Hollywood get out of this 'deal with the devil'? Access to billions of dollars worth of military kit, from helicopters to aircraft carriers, enabling filmmakers to make bigger & more spectacular battle scenes, which in turn generate more box office revenue. Providing they accept the Pentagon's advice, even toe the party line & show the US military in a positive light. So is it a case of art imitating life or sinister force using art to influence life & death & the public perception of both?