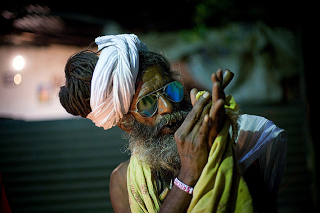 from bbc: Thousands of sadhus - or holy men - have been banned from selling cannabis to festival-goers at an ancient temple in Nepal. They are gathering at Pashupatinath Temple in Kathmandu to celebrate the Hindu festival of Shivaratri. Sadhus - Hindus who renounce the world around them - traditionally celebrate Shivaratri by smoking cannabis. But those found selling drugs at the temple this year will face eviction by armed police, temple officials say. Since last week police have been mingling with the sadhus in plain clothes to identify anyone selling drugs. About 20 sadhus have already been arrested and have been moved to an area outside the city, officials say. The Hindu god Shiva is said to have enjoyed smoking cannabis. Because of that sadhus - who mostly live in forests, caves and temples - see their use of the drug as receiving a blessing from him. Thousands of sadhus have traveled from India for the festival - which falls on 2 March this year - and the temple authority has said it does not object to the sadhus smoking cannabis for their own worship.