Hostess Products Flying Off the Shelves 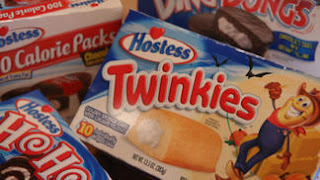 from nbcchicago.com:
In the wake of news that Hostess, the company that makes Twinkies and other baked goods would liquidate its business, Chicago area connoisseurs started hoarding the sweet treats.

The Target store on Roosevelt Road in Chicago reported higher than normal sales for the confections.

"The final numbers won't be in until tomorrow morning, but we sold 18 boxes of Twinkies before 10 a.m.," said a store employee over the phone.

News of the Hostess decision made plenty of people nostalgic for the cake and cream concoctions, and other grocers around the Chicago land area were selling out.

Charlene Sligting, a resident of Elgin, sent an email to NBC Chicago detailing her plans to celebrate the American treat during her boyfriend's birthday party. For her it was a no-brainer.

"As a little girl, my mom would make my lunch and she would drop a different Hostess into my lunch bag and it was always a nice surprise," Sligting said. "My boyfriend and I woke up this morning and saw the news on social media. We're in the middle of planning a birthday party for him on Saturday and we knew that we had to have a Hostess-themed dessert tray."

"I got the last Chocolate Donettes from the Shell in Oak Park...the Walgreens by my job are already out," viewer Rani Morrison posted to the Facebook.

Alphie Jimenez says: "I just cleaned out the Dominick's in Bartlett."

"I went to CVS they (Twinkies) were all gone, I ended up with Hostess cup cakes, which are still good," writes Mimi Lujano.