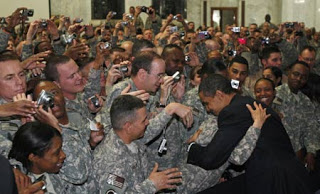 house approves $106b bill to fund wars in afghaniraq

from washington post: The House today passed a $106 billion bill funding the wars in Iraq and Afghanistan through September, as House Democrats backed President Obama despite misgivings among the ranks about his strategy in Afghanistan.

The 226 to 202 vote came after Obama and Treasury Secretary Timothy F. Geithner had called some reluctant Democrats during the day imploring them to back the bill, and Speaker Nancy Pelosi (D-Calif.) had strongly pressed her colleagues in a closed-door meeting to vote for the bill in a show of support for Obama, even if they oppose his strategy for increasing troops in Afghanistan. In the end, 221 Democrats voted for the bill, while 32 opposed it.

All but five Republicans opposed the bill after the White House inserted money to fund a line of credit for the International Monetary Fund, which the GOP said amounted to a "global bailout."

"We are in the process of wrapping up the wars. The president needed our support," said Rep. Anthony Weiner (D-N.Y.), who had earlier said he opposed the war funding but voted for it in the end. "But the substance still sucks."

update1: kucinich: ‘another $106b & all we get is a lousy war’
from raw story: One week after declaring that the United States “cannot afford” the wars in Afghanistan and Iraq “financially or spiritually,” Ohio’s Democratic Rep. Dennis Kucinich, a staunch anti-war crusader, took aim at Congress for not taking a more active role in any of the war on terror fronts.

“We are destroying our nation’s moral and fiscal integrity with this war supplemental... Instead of ending wars in Iraq, Afghanistan, and Pakistan now by appropriating only enough money to bring our troops home, Congress abdicates its constitutional authority, defers to the president, and asks for a report. That’s right, all we are asking for is a report on when the president will end the war... There is also money for the IMF, presumably to bail out private European banks. Billions for the IMF so they can force low and middle income nations to cut jobs, wages, health care and retirement security, just like corporate America does to our constituents. And there’s money to incentivize the purchase of more cars, not necessarily from U.S. manufacturers because a ‘Buy America’ mandate was not allowed... Another $106 billion dollars and all we get is a lousy war... Pretty soon that is going to be about the only thing made in America – war.”

update2: house passes bill with 'global bailout' provision
from steve watson: The House has passed a war funding bill which had tagged onto it a completely unrelated provision to hand over $5 billion to secure $108 billion in loans to the IMF. The chamber voted 226 to 202 yesterday to forward the legislation to the Senate, which may take it up later this week, reports Bloomberg News. The measure in the bill will also increase the U.S. member contribution to the IMF by $8 billion and authorize the United States to back the IMF’s plan to sell 400 tons (12.97 million ounces) of gold. It was placed in the bill at the behest of the Obama administration in order to fulfil the president’s pledge to the G20 in April, to contribute toward a $500 billion boost for the IMF, which it says will go toward “helping poorer nations” during the economic downturn.