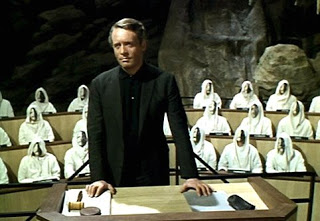 ‘i am not a number!’ patrick ‘the prisoner’ mcgoohan dies at 80

the icon of individuality who will live forever as 'the prisoner'

from paul joseph watson: Fans of the cult 1960’s TV show The Prisoner are today mourning the death of Patrick McGoohan, who passed away aged 80 after a short illness, but the role embodied by McGoohan as 'Number 6' will live on as an icon of individuality and freedom in an increasingly totalitarian and controlling society.

McGoohan’s character, who introduced every episode with the cry, “I am not a number, I am a free man!”, railed against the overlords of a beautiful yet oppressive open air prison known as The Village during the 17 episode series as his ceaseless efforts to escape were continually thwarted by the authorities that ruled over the mostly brainwashed and subservient population.

The series was littered with disturbing parallels to what has unfolded in terms of the big brother panopticon that surrounds us more than 40 years after The Prisoner was first broadcast.

McGoohan himself was the creative force behind many of the episodes as well as playing the lead role and he made it clear in interviews that The Village and its symbolism was merely an allegory for the psychological prison of modern society - authoritarian control, mindless consumerism and lack of independent thought, or as McGoohan put it, “A place that is trying to destroy the individual by every means possible, trying to break his spirit so that he accepts that he is Number 6 and will live there happily as Number 6 forever after,” adding that the character of Number 6 symbolizes “the one rebel that they can’t break”.

farewell, number six*
death of star who will forever be more than number six*
'we want information': the database state*