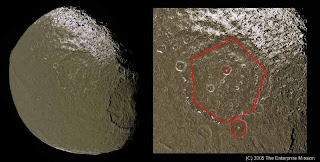 Is Iapetus an artificial moon? Saturn's third largest moon orbits at a much greater distance 2,213,000 miles than the planet's other large moons, Titan and Rhea. Richard C Hoagland examines unusual and baffling physical characteristics of Iapetus in a 2005 article, "Moon With a View: Or, What Did Arthur Know...and When Did He Know It?". The rings of Saturn would be clearly visible from Iapetus, appearing about four times the size of our moon in its sky. The Moons of Saturn are named after Titans of Greek Mythology. Iapetus, whose parents were Uranus (Heaven) and Gaia (Earth), is considered a Titan of mortal life and father of Prometheus and Atlas. Prometheus is the creator of mankind.

Hoagland cannot get past 12 mile high and 12 mile wide ridge rising above surface and spanning over 800 miles. The huge ridge and mountains at the moon's equator give Iapetus an appearance of a walnut. One side of the moon is ten times brighter than the other and some suggest it was done intentionally to bring attention to the satellite. An elliptical shape to the regions makes the moon look much like a ying and yang symbol. There are also pictures of apparent ruins on the surface.

In Part Two, Hoagland observes Iapetus craters are hexagon-shaped that suggest they are manufactured artifacts. Hoagland believes the moon to be modular in design and built by adding units to each layer or shell. Yes, the hexagons fit a tetrahedral pattern!

Hoagland makes good case for evidence of artificial construction of Saturn moon. Iapetus does resemble the Star Wars Death Star and pictures are placed in juxtaposition in Part Three. There is another questionable "natural satellite" in our Solar System far beyond Phobos, which orbits Mars. You have to read article for the Arthur C. Clarke connection. It's a must read!