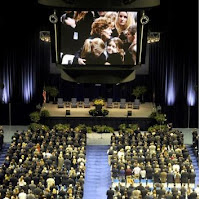 Memorial for former Penn St. coach Joe Paterno took place Thursday in State College, PA as 12,000 mourners attended service. An observation begs consideration if only a note in entire sequence of events. Penn St. Board of Trustees announce firing of Paterno on November 8th. In only a matter of days, public informed Paterno has a "treatable form of lung cancer." Fans sing "Happy Birthday" outside Paterno home on December 21st for Paterno's 85th birthday. Paterno passes away on January 22, 2012 just two months after his "treatable form" of cancer announced. Lee Harvey Oswald assassin Jack Ruby believed he had been injected with live cancer cells, "it is widely known that Ruby believed injections he was being given, were cancer cells. He truly believed he was being murdered in this most unusual manner."

The present writer remembers Ruby's statement, puzzled and astonished, unable to fit into any existing logical assessment pushed it out of mind. There lurks suspicion because this form of murder falls outside the box, most people are unable to properly consider it. Two books, "Dr Mary's Monkey" by Ed Haslam and "Me & Lee" by Judyth Vary Baker, will convince readers weaponized cancer was developed in an underground New Orleans lab in the summer of 1963. Jack Ruby visited the lab even at the time - small world! What is to prevent those in power today to send the order - down the pyramid - to silence a possible leak in a raging pedophile scandal? Is it so outlandish?