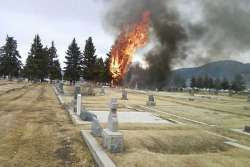 if it bleeds, it leads

shootouts, crashes, murder & mayhem...
4 police officers dead in oakland gun battle
from dpa: A fourth California police officer died Sunday after a gun battle with an armed prison parolee in Oakland, east of San Francisco. Three officers died during the battle Saturday, and the fourth died Sunday of his injuries, radio broadcaster KCBS reported. The suspect had been released from prison on parole, and was sought by the police officers for violating the terms of his release. He had been in jail for armed robbery. During Saturday's exchange, he had several weapons with him. The suspect was killed by a sharp shooter. It was one of the bloodiest police shoot-outs in the history of California.

from dpa: A small passenger plane crashed Sunday afternoon in the western state of Montana, killing an estimated 17 people including a number of children, federal officials confirmed. Les Dorr, the spokesman for the Federal Aviation Administration, could not confirm the exact number of dead. The single-engine propeller plane had departed from California, and was headed to Bozeman, Montana, the FAA said. But it changed its destination at the last minute and tried to land in Butte, where it crashed near the Holy Cross cemetery, about 170 metres short of the landing strip about 3 pm (2100 GMT), according to local media reports. It was not clear why the pilot changed his destination... The aircraft was a small Pilatus POC-12 plane type, normally only licensed to carry ten passengers, Dorr said. The plane is registered to Eagle Cap Leasing in Enterprise, Oregon, Dorr added. It wasn't immediately possible to contact the company by telephone.

update: pilots in 16-death crash jailed for praying instead of flying
from wikinews: The pilot and co-pilot of Tuninter Flight 1153 have each received ten year jail sentences over the ditching of the flight, which killed sixteen people. They were found to have prayed instead of trying to direct the plane to safety when the engines failed. Tuninter Flight 1153 from Bari, Italy to Djerba, Tunisia crashed into Italian waters on August 6, 2005. 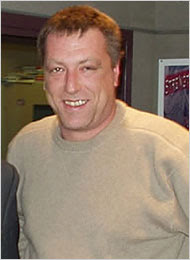 from nytimes: George Weber, a reporter whose voice had been a steady presence on ABC radio for more than a dozen years, was found dead in his brownstone apartment in Brooklyn on Sunday, the police said. The death has been ruled a homicide. The police said they found Mr. Weber’s body about 9 a.m. on Sunday. He had been stabbed, but no weapon was found, the police said.

5k people evacuated after pennsylvania acid spill
from dpa: At least 5,000 residents were evacuated in eastern Pennsylvania after a truck carrying 33,000 pounds of toxic hydrofluoric acid overturned early Saturday. Driver Raymond Leblanc, 54, of Ontario, Canada, lost control of the vehicle while trying to avoid hitting a deer. He was initially trapped in the truck, but was rescued unhurt. Another passenger was also removed from the site and no other injuries were reported, police said. Most of the acid was in the form of pressurized gas, police told broadcaster CNN and the leak was plugged eight and a half hours after the trailer overturned near Wind Gap, Pennsylvania. Residents living within a two-kilometre radius of the accident site were evacuated - many went to a shelter set up at a nearby high school - and were allowed to return to their homes by evening. Hydrogen fluoride acid is highly corrosive and contact with concentrated solutions can cause severe burns. Inhalation of the gas can cause respiratory irritation and serious eye damage.

f-22 crashes in california desert near air base
from daily times: A Lockheed Martin test pilot was killed Wednesday after his US military F-22 aircraft, the world’s most advanced fighter jet, crashed in the southern California desert, the aerospace giant said. David Cooley, 49, was on a test mission in an Air Force F-22 when it crashed at about 10:00 am (1700 GMT), approximately 56 kilometers northeast of California’s Edwards Air Force Base, Lockheed Martin said in a statement.

ntsb got bridge collapse cause wrong 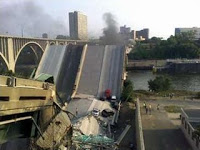 from ap: Experts hired by attorneys for victims of the Interstate 35W bridge collapse say the National Transportation Safety Board got the cause of the disaster wrong, their lead attorney said Wednesday. Attorney Chris Messerly said experts from the engineering firm Thornton Tomasetti Inc. told survivors and families of victims Tuesday night the "initiating event" wasn't the fracture of a key gusset plate in the bridge, but the failure of a horizontal beam called a chord. Messerly leads a group of attorneys representing 117 families of victims and survivors for free. The engineers' conclusions give them legal grounds for suing two contractors that worked on the bridge before it collapsed Aug. 1. 2007, killing 13 people and injuring 145. The experts concluded the "L9-L11 west" chord buckled because of heat stress on the bridge that day, the weight of construction materials on it, and frozen roller bearings that prevented the bridge from expanding as it should have to handle the heat. The engineers said the chord failure then caused the "U10 west" gusset to fail, Messerly said.