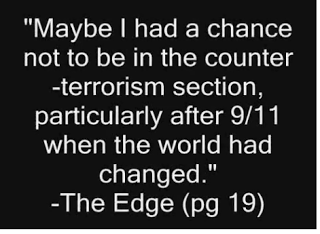 Riggedreality.com, in nice sub-three minute video, provides the hints that our lives are indeed tied to strings.  Many viewers are already aware of  1994 predictive programming novel, "The Final Jihad," by the brother of ex-Oklahoma governor Frank Keating, Norman Keating, which seems a thinly veiled script for 1995 bombing of Murrah building in Oklahoma City?  In another "coincidence," video below informs of excerpt from a Catherine Coulter 1999 novel, "The Edge," "Maybe I had a chance not to be in the counter-terrorism section, particularly after 9/11 when the world had changed."  They're long odds to write fiction that ties terrorism to a culture-changing 9/11 event before it actually occurs and mirrors statement so closely!   Video is available below.