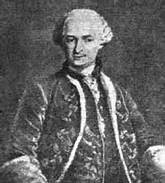 Did Count Saint Germain perfect an alchemical elixir to defeat mortality?   About.com article reports on anecdotal account related by an elderly Countess – a primary source for such rumors:

“…anecdote from 1760 most likely gave rise to the notion that Saint-Germain could be immortal. In Paris that year, Countess von Georgy heard that a Count de Saint-Germain had arrived for a soiree at the home of Madame de Pompadour, mistress of King Louis XV of France. The elderly countess was curious because she had known a Count de Saint-Germain while in Venice in 1710. Upon meeting the count again, she was astonished to see that he hadn’t appeared to age, and asked him if it was his father she knew in Venice. ‘No, Madame,’ he replied, ‘but I myself was living in Venice at the end of the last and the beginning of this century; I had the honor to pay you court then.’ ‘Forgive me, but that it impossible!’ the perplexed countess said. ‘The Count de Saint-Germain I knew in those days was at least forty-five years old. And you, at the outside, are that age at present.’ ‘Madame, I am very old,’ he said with a knowing smile. ‘But then you must be nearly 100 years old,’ said the astonished countess. ‘That is not impossible,’ the count told her matter-of-factly, then continued to convince the countess that he was indeed the same man she knew with the details of their previous meetings and of life in Venice 50 years earlier.”

Saint Germain born in 1694 died in 1784, according to records, but sightings – always appearing middle aged – continued for decades. Did an elixir make it possible for Saint Germain to live on for generations?  Another article at Fortean Times, however, deflates mystery by informing:  “We can, however, identify the elixir of life with some certainty.
St-Germain made no secret of it: it was a tea of elder flowers, fennel,
and senna pods, soaked in spirits of wine. I’m afraid it was a laxative –
a potent one, in fact. Similar mixtures are still on the market. To
approximate the Count’s recipe, top it off with brandy. To your health!”