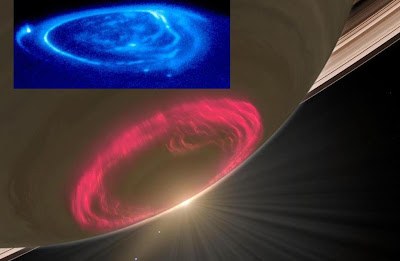 Take a brief and beautiful tour of auroras (or aurorae) from around the world, then depart for more pix from other points in the solar system, Saturn (red) and Jupiter (blue). Auroras are building and will reach an aurora max in 2012. First stop, Northern Lights in Iceland are pictured on The Telegraph UK website. The next stop is in Scotland, where Jim Henderson captured exceptional images in, "Awe-inspiring auroras: The psychedelic majesty of the Northern Lights captured in the skies over Aberdeen. The Jovian planets are huge magnets, Jupiter's magnetosphere is 20,000 times greater than the Earth's and UV studies at the University of Arizona go into detail with auroras pictured here. The European Space Agency's Mars Express spacecraft captured pix of Mars aurora here. Our neighbor Venus is, perhaps, unique with little intrinsic magnetic field, but has a "night glow" from the solar wind. You can learn more about how auroras form here. The viewing will only get better as we approach the Solar Max and Aurora Max of 2012.