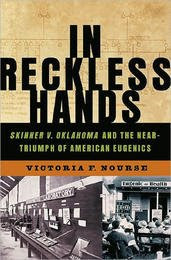 ‘in reckless hands’ looks at oklahoma’s history of eugenics

from the oklohoman: Oklahomans may be surprised to learn the state shares a dark past with Adolf Hitler and Nazi Germany. Eugenics, the wonder science of the early 1900s, hailed by academics worldwide as a means to improve a race by sterilizing those who possessed serious heredity defects, was also embraced by Gov. Alfalfa Bill Murray. This book, In Reckless Hands: Skinner v. Oklahoma and the Near-Triumph of American Eugenics (W.W. Norton, $24.95) by Victoria F. Nourse, examines how a scientific theory about nature was transformed into the basis of social policy ordained by the power of the state of Oklahoma.

The case's backdrop began in 1927 when the U.S. Supreme Court upheld a forced sterilization of a feeble-minded girl in the case of Buck v. Bell. Justice Oliver Wendell Holmes wrote, "Three generations of imbeciles [were] enough.” The law deferred to the state of Virginia's right to regulate health and safety.

Jack Skinner, 24, held in the McAlester prison for stealing 23 chickens and armed robbery, challenged the 1935 Oklahoma law that mandated sterilization for undesirable persons in prisons or state asylums. Subject to the law were three-time repeat criminals or the feeble-minded. The law mandated his sterilization before he could return to society after his sentence was satisfied.

The book's title comes from a line in the 1942 U.S. Supreme Court decision of Skinner v. Oklahoma striking down this Oklahoma law, warning that "in reckless hands” an entire "race or types” might "wither and disappear.” Not coincidentally, this was the year Nazis were trying to eradicate the Jewish race on the theory of natural inferiority. Ideas have consequences, and bad ideas can produce horrible consequences. Yet, as late as the 1960s, more than 100,000 people had been sterilized under U.S. federal health and welfare programs, the author writes.

Nourse, a law college professor at Emory University, provides a fascinating story of gritty and determined Oklahoma lawyers who took Skinner's case to the nation's highest court. This book should appeal to general readers of Oklahoma history and those interested in the modern science of genetics, which likewise promises a better future through the selection of desirable genetic traits. Will the history of human engineering repeat itself?