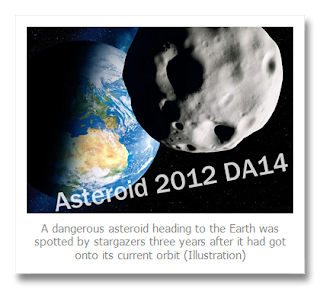 Author Ted Twietmeyer alerts readers in article, "February 2013 Asteroid To Pass THROUGH Satellite Belt," the 187 ft rock will pass through the satellite belt not once but twice at 10.6 miles per second on February 15, 2013.  "Telephone and television satellites are parked in geostationary orbits in the Clarke Belt at 22,500 miles with less than two degree spacing. The belt is named after Arthur C. Clarke. He came up with the idea of parking satellites at that distance from Earth while establishing the correct velocity. This invisible sweet spot around Earth is called a geostationary orbit, and allows satellites to operate there almost indefinitely, requiring very little energy to keep it from drifting," explains Twietmeyer.   Asteroid 2012 DA14 estimated closest approach to Earth at 21,497 miles, means it will pass through satellite belt twice on its incoming swing and as it leaves vicinity on its return into outer space!  Spanish skygazers discovered 2012 DA14 earlier this year and initially thought its chances good of striking Earth?

Twietmeyer took occasion of two flybys of 4179 Toutatis on 12-12-12 and 2012 XE54 the day before to remind readers of our next known upcoming date for a  close encounter:

"All three of these asteroids are registered as 'Potentially Hazardous Asteroids' (PHA.) Fortunately Toutatis is the biggest one of these three asteroids which can wipe out life on Earth, and it remains far away. Asteroids earn PHA classification by a combination of Earth-crossing orbit, a certain size and velocity. All these characteristics combine together can enable a PHA to destroy a continent or even the entire Earth. Fortunately, 2012 DA14 and 2012 XE54 are not large enough to cause global or continental damage."

It must be considered a plus that Asteroid 2012 DA14 doesn't rate as a terminator roid, but what about its return in 2056?   Are reports of Near Earth Objects intended to play on our fears? Dr Carol Rosin reminds us of agenda to weaponize space because of asteroid threat?