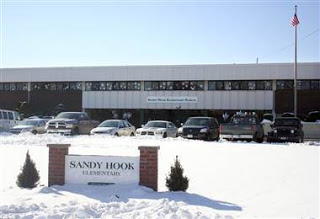 Sandy Hook Truth website provides summary of three months of research into incident.  The writer, is convinced, shooting was a manufactured event:

"I’m writing this from the perspective that I believe there were no victims, there is no Nancy, Peter, Adam or Ryan Lanza, the school probably was not operational at the time of the shootings, no kids were moved to Chalk Hill, and most (if not all) of the photos and video we saw that day were made in advance with green screen technology.  Unless I see evidence to suggest otherwise, this is what I believe.  I completely understand that many of you have different theories about it and that’s fine.  I could be wrong but this is what makes sense to me at this point and believe me, I’ve spent many, many hours looking at all of this."

Wow!  Discoveries are interesting even compelling many not reported elsewhere!

How the school crime scene was processed, is not new, but remains glaring in its indictment of incident:

"In a real situation with a shooting and mass casualties, ambulances would have been rushed to the doors of the building, EMT workers would have entered immediately, checked on the status of each victim, placed them on a stretcher and rushed them to a hospital, even if they couldn’t get a pulse. There would have been efforts to save them. There were none. That defies logic. They would have never allowed bodies to remain in the building overnight. It is un- precedented. No explanation was ever given for this but how can one not conclude that they were hiding the fact that no bodies needed to be transported anywhere because there were none...No information about the people transported to the hospital: We have yet to receive names of the two kids and two adults who were taken to the hospital.  We have never been given the name of the little girl who walked out of the school covered in blood.  Was she not taken to the hospital?  Why wouldn’t she have been taken to the hospital?"

"I noticed early on that 12/25/09 appears as the sold date on the majority of the homes in the area. The only explanation given by the clerk’s office is that they got a new computer system on that date but that doesn’t explain why some of the properties do not have that date, such as the Lanza’s.

Several properties on Riverside were listed for sale just after the shootings; one of them the day after. All of them are in foreclosure now. Two of them are directly across from the fire station. Coincidence?

The Pozner’s home has been abandoned, is being gutted and is in foreclosure. The Gays listed and sold their home in January.

There’s no Google street view for any of the side streets throughout Newtown and Sandy Hook and the imagery is old, most of it from ’08 or ’09 and it’s blurry and dare I say some of it looks photo-shopped or manipulated. This isn’t normal."

The Sandy Hook Fire Station seems even inappropriate with seven bays in front and two more in back. An enormous station for a volunteer fire department, author rightfully makes comparison to nearby Newtown:

"Newtown fire department is actually searching for a location to build a new fire station because they are using a converted jail behind a town hall building and it’s literally falling apart from what I’ve been able to determine. How is it that Sandy Hook (all volunteer) has an enormous station with brand new looking trucks? It doesn’t seem right."

The writer harbors doubts also about appearance of school iself:

"I can’t prove this but I can’t help but wonder about the building. I believe it could have been shut down years ago due to the condition of the roof, the parking lot, no sign of any activity, no flyers on the doors, signs, Christmas decorations and things one would expect to see at an elementary school."

There's more such as Facebook page set up very day of shootings to solicit donations for Parker family's daughter Emily, who was reported killed. The present writer admires long look writer has dedicated to Sandy Hook Shooting!  The writer's sentiments about implications of shootings are right on:  "They can only win if they achieve their goals.  If Americans refuse to go along with all of this, they will have accomplished nothing.  So we must oppose all gun legislation, mental health reform and increased security in our schools.  We don’t need it.  We don’t want it.  Leave us alone." Hats off to this patriot for seeking Sandy Hook Truth!