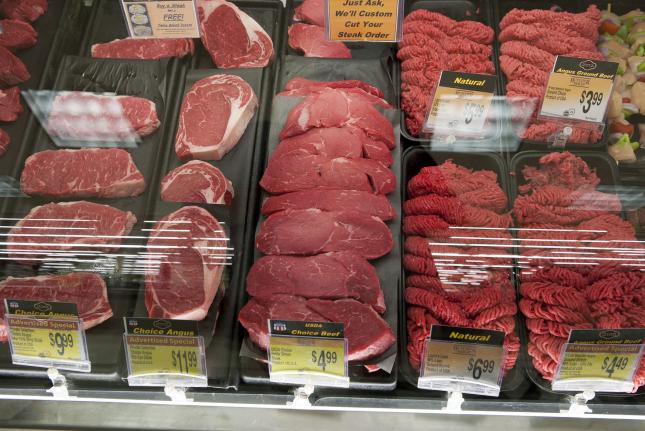 Fears expressed over shakeup in rules that shifts responsibility for checking quality shifts to food companies.

from theguardian.co.uk: Food inspectors have issued a grim warning that more infected animals could enter the food chain because of a shakeup in the inspection process which, they say, means some of the millions of animals they reject each year as unfit for human consumption could still reach Britain's plates.

Figures collected from UK factories show that millions of carcasses carrying parasites such as tapeworm and animals infected with pneumonia, septicaemia, peritonitis and tumours were removed from the food chain by official inspectors between 2012 and 2014. More than 560,000 cases of milkspot, caused by parasitic roundworm larvae, were identified in pigs in the past two years. Nearly 3 million chickens contaminated with faeces during slaughter were stopped from becoming food in the same period.

Inspectors warn that such diseased and dirty meat may be more likely to enter the food chain if proposed changes to abattoir inspections go ahead. Unison, the union representing government meat inspectors and official vets, says that new rules from Brussels water down inspectors' ability to check the quality of meat and shift responsibility to food companies. The horsemeat scandal shows that industry cannot be trusted to police itself, it says.

The statistics on diseases identified in carcasses were collected by the UK regulator, the Food Standards Agency (FSA), in response to a parliamentary question from Labour. Inspectors recorded more than 2m instances of tapeworm in red meat in the past two years. They also rejected nearly 3m animals with pneumonia, 450,000 with abscesses and 28,000 with TB.

As well as the 3m chickens recorded as being contaminated with chicken faeces, 5.5m cases of ascites – a build-up of fluid caused by heart or liver disease – were identified, along with 1.8m cases of peritonitis and 4m of septicaemia.

Faecally contaminated chicken is the leading cause of campylobacter, the most common form of human food poisoning in the UK. It can be killed by thorough cooking, but there are 460,000 reported cases, 22,000 hospitalisations and 110 deaths each year as a result of the illness.

The FSA pointed out that more than 1.7bn chickens were slaughtered over the two-year period and that carcasses rejected by inspectors represented a tiny fraction of the total throughput.

The European commission has argued that it needs to modernise legislation affecting the food chain and is in the process of reducing 70 pieces of detailed regulation down to a framework of five overarching regulations to "reduce the burden on business" and "improve consumer protection".

Rules on inspections of pig carcasses have already been changed. Officials have until now cut into pig heads to check that the animals were not carrying hidden disease and abscesses, but new regulations being introduced in June remove this routine physical check and replace it with a visual inspection.

Currently, all chicken carcasses are checked after slaughter by official inspectors or vets in factories, but the European Food Safety Authority has recommended that this requirement be abolished as it is ineffective at identifying contamination.

A further proposal from the European commission will amend regulations that currently list all the diseases that must be removed from the human food chain and replace it with a more general requirement on safety, health and welfare. Many of the diseases and parasites that inspectors currently find do not cause illness and do not fall into the major categories of animal disease and welfare that the new regulations would cover, such as foot and mouth or BSE, but Unison believes consumers would nevertheless be disgusted by them.

The union has accused the UK government of lobbying in Brussels for deregulation to reduce industry costs. Unison's national secretary for government service groups, Heather Wakefield, said: "The UK government's agenda will result in food that repulses us being dished up on our plates.
"Most people do not know that there are a small group of meat inspectors and vets that keep them safe from harmful and repulsive additions to our sausages, Sunday roasts and beef pies. They work in some of the most awful conditions in blood and animal discharges every day. They are always the first to come under attack, not only from the food business operators, but also from our government."

Labour has added its weight to concern that independent meat inspection is being watered down. The shadow food minister, Huw Irranca-Davies, said: "The government need to explain why they are seeking to weaken consumer protection and the wholesomeness of produce, barely a year after the horsemeat scandal.

"British consumers will be appalled at any risk of tapeworm, parasitic lungworms and diseased parts of animals ending up on their dinner plates at home, or in hospitals and schools."

The FSA said, however, that factories would still be required to produce meat that is "fit for human consumption" and that there are more effective ways to identify meat that is unsafe or unfit than mandatory inspection of all carcasses.

It told the Guardian that officials could still reject any animal they were concerned about and that the routine physical inspection of pigs could actually spread harmful bacteria. "The new approach to pigmeat inspection across the EU will improve consumer protection," it said.

The European consumers' organisation, BEUC, believes the changes effectively hand over the policing of meat to the food industry itself. Camille Perrin, BEUC's senior food policy officer, said: "Governments are cutting back on budgets for food controls and so some are pushing for inspections to be carried out by abattoir staff themselves. This is not the way to go. They have to remain independent and free of conflict of interests."

In December, Chris Elliott, the chairman of a independent inquiry launched in the wake of the horsemeat scandal, warned that the food sector is a "soft touch" for criminals who know there is little risk of detection or serious penalty, that the FSA is insufficiently robust, and that the industry's audits are inadequate to detect food crime. He recommended the creation of a new police force to combat food fraud.