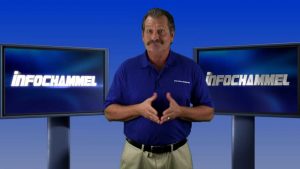 Odds are, you are unfamiliar with most of the hundreds of television networks out there. One network, though, is different from those overlooked content dispensaries that are buried in the high-numbered channels of your cable package. Not delivered through cable, satellite, or over the air, this channel exists in piecemeal, on YouTube, Roku, and Amazon.

It’s called InfoChammel and it is remarkably, aggressively, stupefyingly weird. It’s television antimatter: a TV channel that, it would seem, doesn’t wish to be watched.

“For four years, Davy Force has been creating videos in a small room in his basement and uploading them to a YouTube account called InfoChammel. (No, not “channel.” Chammel.) And in that time, practically no one stumbled across Force’s creation…

“That’s not the weird part; aspiring filmmakers earnestly upload videos to YouTube every day that never eclipse 1,000 (or even 100) views. But Force isn’t an amateur. By day, Force is a talented 3D animator who has ties to the Tim and Eric empire, but works in the more mainstream entertainment industry…”

There are other “shows” with real people, too — though Force says a lot of those were created using either stock footage or Fiverr, an internet service where you can pay people as little as $5 for creative services. Force would write scripts and send them to people on Fiverr, and they would send back footage of themselves reading testimonials about their InfoChammel experience, or advertising for fake law firms.

“…I first stumbled across InfoChammel…on Amazon while browsing old horror films. There, InfoChammel exists as a 2.5-hour “movie,” a mish-mashy Frankenstein’s monster of mostly the same videos you can find on the YouTube channel. InfoChammel is also available as a constantly looping channel on Roku…“

“I never knew television could be like this. Ancient Aliens and Lip Sync Battles have turned watching television a painful and slow descent into madness. I nearly threw my TV away until I discovered InfoChammel. Fred Furner’s brilliant (and free!) offering featuring posi-hypno programming has changed me in ways I can’t fully describe with mere words. I sleep better. I eat better. I AM BETTER.“

“Its required viewing for people who are into culture jamming, Emergency Broadcast Network, Plunderphonics…” And Negativland and cats and ‘Max Headroom’ and ‘Schizopolis’… And perhaps our upload of the ‘Droplift Project‘?