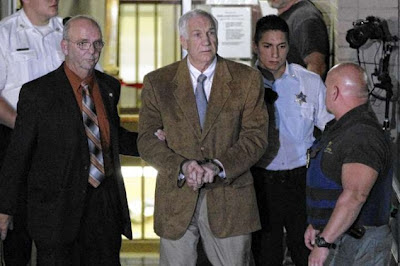 from now.msn.com: After being stripped of all dignity and facing a minimum of 60 years in prison on child sex abuse convictions, it's been reported that disgraced ex-coach Jerry Sandusky was further shamed upon arriving at a Bellefonte prison by inmates taunting him with rounds of the lyric "Hey, teacher! Leave those kids alone" from "The Wall." Prisoners at the Centre County Correctional Facility were prohibited from direct communication with the former Penn State coach but could see him, and when the lights went down, they began serenading the convict with the classic Pink Floyd anthem through the walls. Sandusky is on suicide watch, and his lawyers have said they plan to appeal the guilty verdict.