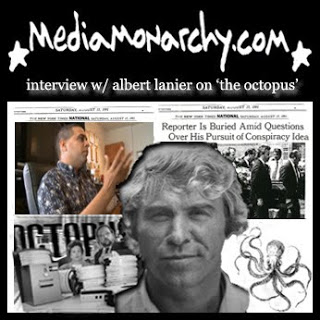 this special interview episode from media monarchy covers the explosive case of a freelance journalist, who at the time of his death in 1991, was researching an insidious & wide-ranging conspiracy that he called 'the octopus' ... to help us examine the tentacles of this spy state, we're joined by film critic & researcher albert lanier (see: 'crisis in journalism' & 'secret societies & the media') ... the death of danny casolaro is just the beginning of our conversation. put simply & from an historical perspective: this isn't just about a dead reporter. this is more than just a software company in a contract dispute. the story of 'the octopus' connects the dots to nearly every nefarious event over the last century - and the sinister aftershocks are happening still ...

'the octopus' videos: secret government &
the death of danny casolaro

(this episode also contains the audio from the above playlist of 7 videos -
they follow the interview & begin @ 2:02:40)

further notes/references:
the last days of danny casolaro*
reporter is buried amid questions over his pursuit of conspiracy idea*
the inslaw affair: investigative report by the committee on the judiciary*
wired: the inslaw octopus*
youtube channel: the casolaro project*