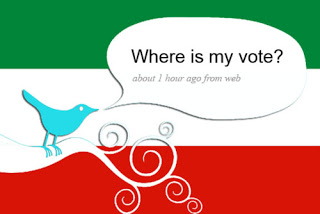 from corbett report: It's the 2009 presidential election in Iran and opposition leader Mir-Houssein Mousavi declares victory hours before the polls close, insuring that any result to the contrary will be called into question. Western media goes into overdrive, fighting with each other to see who can offer the most hyperbolic denunciation of the vote and President Ahmadenijad's apparent victory (BBC wins by publishing bald-faced lies about the supposed popular uprising which it is later forced to retract). On June 13th, 30,000 "tweets" begin to flood Twitter with live updates from Iran, most written in English and provided by a handful of newly-registered users with identical profile photos. The Jerusalem Post writes a story about the Iran Twitter phenomenon a few hours after it starts (and who says Mossad isn't staying up to date with new media?). Now, YouTube is providing a "Breaking News" link at the top of every page linking to the latest footage of the Iranian protests (all shot in high def, no less). Welcome to Destabilization 2.0, the latest version of a program that the western powers have been running for decades in order to overthrow foreign, democratically elected governments that don't yield to the whims of western governments and multinational corporations.