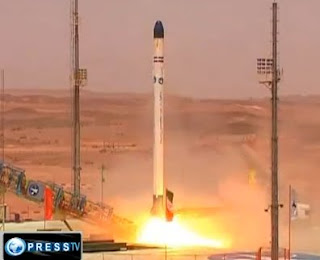 Iran launched Rasad-1 (Observation-1) into orbit, Wednesday. You have to like the humor in a Satnews Daily article, where subheading reads, "Iran... Why, Of Course This Is A Satellite Tasked With Peaceful Intentions (Launch)." Rasad-1 follows launch of Omid (Hope) in 2009. Iran's observation satellite weighs 34 pounds, will orbit every 90 minutes 162 miles up at an inclination of 55.7 degrees. Where's the right wing fear mongers to recite party line: rocket tech used in launch can also launch missiles? The present writer felt a deja vu to a more innocent time when space exploration meant new frontiers with wide horizons other than militarization and weaponization! The launch looked rudimentary if well-done with a resemblance to the fifties and sixties. "Seh do yek"...how do you say lift off in Farsi and may get more familiar with their countdown in time?