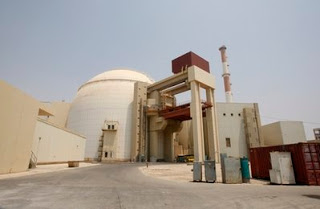 iran starts a reactor, while israel has ‘hundreds of nuclear bombs’

from ap: Trucks rumbled into Iran's first reactor Saturday to begin loading tons of uranium fuel in a long-delayed startup touted by officials as both a symbol of the country's peaceful intentions to produce nuclear energy as well as a triumph over Western pressure to rein in its nuclear ambitions.

The Russian-built Bushehr nuclear power plant will be internationally supervised, including a pledge by Russia to safeguard it against materials being diverted for any possible use in creating nuclear weapons. Iran's agreement to allow the oversight was a rare compromise by the Islamic state over its atomic program.

Western powers have cautiously accepted the deal as a way to keep spent nuclear fuel from crossing over to any military use. They say it illustrates their primary struggle: to block Iran's drive to create material that could be used for nuclear weapons and not its pursuit of peaceful nuclear power.

Iran has long declared it has a right like other nations to produce nuclear energy. The country's nuclear chief described the startup as a "symbol of Iranian resistance and patience."

"Despite all pressure, sanctions and hardships imposed by Western nations, we are now witnessing the startup of the largest symbol of Iran's peaceful nuclear activities," Ali Akbar Salehi told reporters inside the plant with its cream-colored dome overlooking the Persian Gulf in southern Iran.