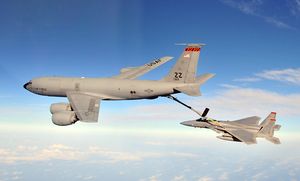 Gordon Duff suggests in Press TV article, "Iran threatened by possible US Air Force mutiny," that a "rogue element" may be operating outside US Air Force command structure?  The article reports intelligence chatter of a possible missing KC 135 refueling tanker. "Sources indicate that at least one of these aircraft, said to belong to a command of the Arizona Air National Guard stationed at Sky Harbor IAP/ANGB near Phoenix, may be the source of the missing aircraft."
The KC 135 tanker headed out over the Pacific and could be used to refuel Israeli F-15s (picture) in a war with Iran.  Mid-air refueling eliminates need also to cross foreign air space.   This follows Duff trumpeting in recent weeks about presence of internal threat to US Government amid concerns "...the Air Force Academy in Colorado Springs...used as recruiting ground for extremist sects":

"A further indication of a
possible threat was referred to by President Barack Obama when, on
November 21, 2012, while returning from his Far East trip, a memorandum
was issued warning of 'Insider Threats' against the 'US Government and
the nation.'"


"The [White House] memorandum advised close monitoring of military and civilian
branches of the government for threats citing both 'vast espionage' and
use of  'violence.'"

Many would dismiss Duff as fear-mongering, but in light of recent instability with American deaths in Benghazi and stepping down of David Petraeus at the CIA, present peril demands our attention!