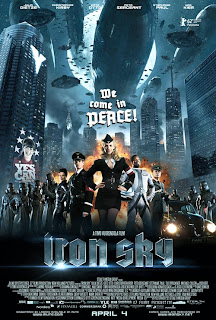 Iron Sky, movie based on storyline Nazis escaped end of World War II to inhabit dark side of the Moon.  Moon Nazis plan for 70 years at secret base Schwarze Sonne jump-start attack in 2018, when United States lands a manned Moon mission too close for comfort.  Moon Fuhrer played by Udo Kier makes decision for Fourth Reich to begin attack early.  The Nazi spoof played in Berlin on February 11th at the Berlinale film festival.  You may view Berlin festivities  here and here. The Independent, in article covering festival, refers to Iron Sky as an unlikely hit, "Iron Sky sold out faster than movies directed by Angelina Jolie and Werner Herzog – a remarkable feat for a film that only received financing after appealing for donations on the internet, which raised $1 million of the $7.5 million budget." The official movie trailer is here. You can be first to take in Iron Sky in USA at SXSW film fest in Austin, TX on March 10th, a midnight screening.  Iron Sky debuts, officially, in Finland, location of principal production facilities, on April 4th and in Germany April 5th.  We will see you in Valhalla!