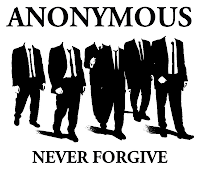 A rumor storms cyberspace hacker group Anonymous threatens to crash internet! Nibletz.com covers story with suggested target date of March 31st. Anonymous wants "to protest SOPA [Stop Online Piracy Act], Wall Street, our irresponsible leaders and the beloved bankers who are starving the world for their own selfish needs out of sheer sadistic fun, On March 31, anonymous will shut the Internet down...We’ll look to shut down the Internet by disabling its core DNS servers, thus making websites inaccessible," so goes story. Is Anonymous another attempt at fielding a controlled opposition? Infowars.com chimes in with recent article on their website, "Assange and Anonymous As Elite Helpers?" The article exposes likely goal, "more ominously, even, it will feed into the elite meme that the Internet is a dangerous and unpredictable place, one that needs to be rigorously controlled and scrutinized. Anonymous, within this context, has just reaffirmed its place as a great argument for SOPA and increased Internet censorship generally. Coincidence?" It's like a bad high school play, where the ending is transparent to anyone paying attention! Internet may well be taken down at some point and most likely by desktop warriors in DC area. Stop Online Privacy Act will be strengthened. Online dissidents will be routed out. A controlled TV-like internet II debuts with less access at greater cost? Hey, it takes lots of money to protect (control) you! It may well be the script?