is establishment preparing to unveil aliens? 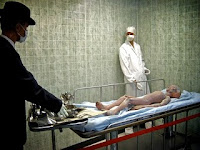 Nicholas West writes, in Activist Post entry "Is the Establishment Preparing to Unveil Aliens?", about the series of - well, strange - stories appearing recently in the press. West points out the closing of airports in China due to UFO sightings, the Pope's Astronomer saying he would gladly baptize ET and a pending appointment for a UN Space Ambassador, as some examples. West seems to be on the mark in filling in the blanks of whether this groundswell of support is meant to legitimize an alien threat. The present writer asks: is this propaganda or Project Blue Beam on a direct course to The Great Deception? West's blog entry is pure conspiracy theory and a full plate for anyone with the appetite. What's so odd is that none of this sounds as far out as it would have just a decade ago! West is on the right track and, by raising awareness, humanity may not be fooled in the end!