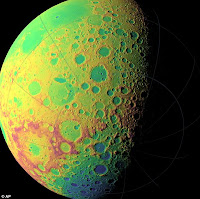 Zen Gardner alleges in article, “NASA Photos Confirm Moon is Artificial?“, summarizes many points of irregularity in relation to our lunar satellite.  Gardner recalls the “ringing like a bell” references of Apollo missions which imply a hollow sphere.  An observation is made the bottom of the craters are convex not concave the opposite of expectations for an impact crater.  The author points to the presence of metal and alleges the moon is a hollow sphere with a 20 mile thick metal exterior that lies 2-3 miles below the surface.  The moon’s orbit is also wrong in many scientists’ estimation for its size and mass.   It’s also, according to evidence, reputed to be older than the Earth.  Gardner uses the following source article at Red Ice Creations by N Huntley, “Our Enigmatic Moon“. The picture at left is a recent image from the Lunar Reconnaissance Orbiter (LRO).