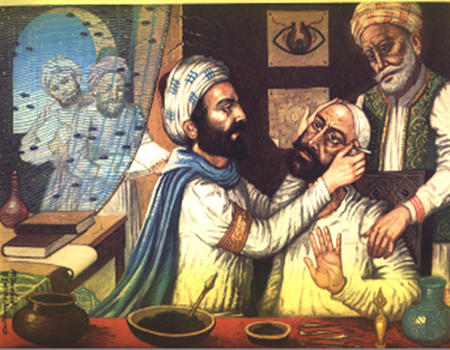 Islamic Culture and the Medical Arts

from www.nlm.nih.gov: In the field of materia medica and its applications, Islamic writers surpassed their earlier models, primarily because their broader geographic horizons brought them into contact with drugs unknown to earlier peoples, such as camphor, musk, sal ammoniac, and senna. In later Arabic works, medicinals were used that came from as far afield as China, Southeast Asia, the Himalayas, southern India, and Africa.

The preparation and use of medicinal drugs was a topic that also had its own specialized literature. Knowledge of medicinal substances was based initially upon the approximately 500 substances described in the 1st century AD by Dioscorides in his Greek treatise on materia medica. Numerous Arabic and Persian treatises were subsequently written on medicaments. Medical encyclopedias usually had one chapter on materia medica and another on recipes for compound remedies. Formularies were often composed as larger independent collections of recipes, and some were written for specific use in hospitals.

The largest and most popular of materia medica manuals was that by Ibn al-Baytar, who was born in Malaga in the kingdom of Granada towards the end of the 12th century and became `Chief of Botanists' in Cairo in the first half of the 13th century. His Arabic treatise, The Comprehensive Book on Materia Medica and Foodstuffs was an alphabetical guide to over 1400 simples taken from his own observations as well as from 150 written sources that he names.


His manual formed the basis of many subsequent manuals on medicinal substances, including that written in the 18th-century by Muhammad Husayn ibn Muhammad Hadi al-`Aqili al-`Alavi, a practitioner in India and grandson of a well-known Indian practitioner. The illuminated presentation copy, now at the National Library of Medicine, of this alphabetical Persian treatise on materia medica titled The Storehouse of Medicaments Concerning the Explanation of Materia Medica (Makhzan al-adwiyah dar-i bayan-i adwiyah) is typical of late Safavid Persian manuscript workshops, though it is likely that the Safavid artisan had moved to the Mughal court at Delhi since the volume was produced in 1732 (1144 H), the year the Safavid dynasty in Iran collapsed and effectively ceased to rule.

The topic of poisons was of great interest in both antiquity and the medieval world and it also generated its own literature. Snake and dog bites as well as the ill effects of scorpions and spiders and other animals caused much concern, while the poisonous properties of various minerals and plants, such as aconite, mandrake, and black hellebore, were exploited. Galen and Dioscorides were considered ancient authorities on the subject, and many spurious treatises on the subject were attributed to them. Numerous Islamic writers discussed poisons and particulary theriacs, the antidotes for poisons.

A particularly important Arabic treatise on antidotes for poisons was written in 1270 (669 H) in Syria by `Ali ibn `Abd al-`Azim al-Ansari. The treatise provides information regarding medical learning in the Crusader States as well as the plants that the author decribes as having been found in Syria at the time. Moreover, al-Ansari incorporated into the study extensive quotations from other treatises on plants and antidotes. Among these were the writings of the 10th-century Egyptian physician al-Tamimi and the Syrian physician Rashid al-Din al-Mansur ibn al-Suri, who died in 1243 (641 H).

The latter is known to have prepared an illustrated herbal with figures drawn from plants he observed on his travels. Both the illustrated herbal by Ibn al-Suri and the treatise on antidotes by al-Tamimi are lost today, making the citations given by al-Ansari our only source of information regarding their contents.

Islamic physicians not only contributed to the recording of new medicinal substances and compound remedies, but also, in collaboration with other artisans, developed new equipment for the pharmacy. `Albarello' is the name given to drug jars having a waisted form with slightly concave sides which became popular in Europe from the 15th century onward. The design employed by the pharmaceutical potters of Europe was taken directly from the medieval Islamic world, for the earliest examples preserved today were made in Syria near the end of the 12th century. The contracted waist of these jars allowed them to be easily removed from a row when set side by side on a shelf. They were used for storage of a variety of herbs, roots, seeds, spices and other medicinal substances.
Many of the techniques employed in drug production were also part of the realm of alchemy. The Arabic word al-kimiya, from which we derive the word alchemy, was used for both chemistry and alchemy, and no clear distinction was made between the two activities. A wide range of chemical processes was undertaken by both the druggist and the alchemist, and the workshops would be stocked with a large number of vessels such as alembics (the head of a distilling device), cucurbits (the lower part of the distilling apparatus), receiving vessels, funnels, water-baths, filters, and crucibles, in addition to the mortars and pestles for pulverizing and crushing substances and braziers and stoves for heating them. In the distillation process, a substance would be heated in the cucurbit and the distillate would form in the alembic and pass through the delivery tube into a receiving vessel.

Distillation was one of the most important processes in Islamic chemical technology and was employed for both medicinal preparations and a variety of other technological and industrial uses, including the preparation of acids and the distillation of perfumes, rose-water and essential oils. As the equipment and processes of alchemy developed -- with its methods of evaporation, filtration, sublimation, crystallization, and distillation -- they came to influence pharmacy and medical chemistry.

The formative Arabic treatises on alchemy were those under the name of Jabir ibn Hayyan, an 8th-century polymath familiar to Western readers as Geber. In these writings there was elaborated for the first time the idea of an elixir that served as a general medicine or life-giving potion. Numerous subsequent books were composed on alchemy, including some by the physician al-Razi in the late 9th century.

One of the last Arabic alchemical treatises -- and the most comprehensive -- was that by the Egyptian alchemist `Izz al-Din Aydamir al-Jildaki, who died in 1342 (743 H). His treatise The Proof Regarding Secrets of the Science of the Balance (Kitab al-Burhan fi asrar `ilm al-mizan) was concerned to a large extent with the classification of plants, animals, and minerals, and with the concept of `balance'. The alchemist attempted to assess the `balance' of any given substance by a system employing numerology, the 28 letters of the Arabic alphabet, and the numerical value of the name of the substance in order to determine the proportional structure of the substance's attributes -- that is, heat, dryness, coldness, and fluidity. Al-Jildaki's treatise represents the mystical and allegorical trend in alchemy, but it is also evident that the author had much experience with practical chemical operations and substances.

A popular treatise, al-Jildaki's alchemical manual continued to be copied through the 19th century. The copy at the National Library of Medicine is one of the finest recorded products of a workshop of illuminators in Morocco during the reign of Sultan al-Hasan I, who ruled from 1873 to 1894 (1290-1312 H), and is a fine example of modern Islamic calligraphy and illumination.