from press tv: A document has surfaced in a UK auction, unveiling terrorist activities of a Jewish group prior to the establishment of the Israeli regime. According to the Times of London, the pamphlet unveils several terrorist activities of a Jewish underground group - Irgun - led by Menachem Begin, the future Israeli prime minister. Bombings and murders by underground groups in Palestine, such as Begin's Irgun, hastened the British withdrawal and the United Nations declaration that led to the founding of Israel. 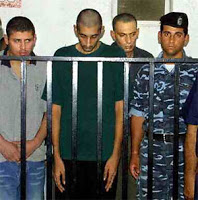 from kurt nimmo: In order to set the stage for further attacks against Muslims, most notably Iran, Israel has cooked up a transparently phony terrorist attack against Bush. “Israel accused six Arabs on Friday of trying to set up an al Qaeda cell in Israel and said one of them had proposed attacking helicopters used during a visit by President George W. Bush,” reports Reuters. Recall Israel’s shabby attempt to create a fake al-Qaeda cell in the Gaza Strip back in December, 2002. “The head of preventive security in Gaza, Rashid Abu Shbak, said Israeli agents posing as operatives of al-Qaeda recruited Palestinians in the Gaza Strip,” the Sydney Morning Herald reported at the time.

US to iran: you have 2 weeks
from press tv: Washington says Tehran has two weeks to decide between suspending its uranium enrichment program and facing 'further isolation'. In a Saturday statement, State Department spokesman Sean McCormack said time has come for Tehran to choose between confrontation and meeting Western demands over its enrichment program. "We hope the Iranian people understand that their leaders need to make a choice between cooperation, which would bring benefits to all, and confrontation, which can only lead to further isolation," said McCormack.

from time: Even for a country now routinely scarred by violence, the scenes were startling. On Thursday, the clashes in Pakistan were not with militants near the Afghan border but in the financial districts of Pakistan's major cities as hundreds of angry investors visited their rage on stock markets that failed them.

from reuters: The Mexican military, working with information from U.S. intelligence services, found nearly six tonnes of cocaine in a makeshift submarine seized this week off the Pacific coast. The 32-foot (10-metre)-long, green fiberglass craft was designed to travel just beneath the water, leaving almost no wake. It was one of Mexico's largest maritime drug seizures and the first time the country has seen drug smugglers using a submarine, the navy said.