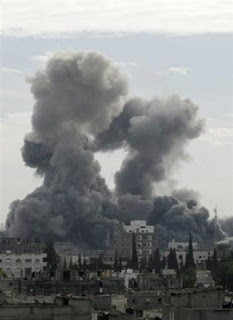 from reuters: Israeli warplanes and helicopters pounded the Hamas-ruled Gaza Strip on Saturday, killing at least 205 people in the bloodiest one-day death toll in 60 years of conflict with the Palestinians. Militants in the Gaza Strip, who have launched dozens of rocket attacks against Israel since a truce expired just over a week ago, fired more salvoes that killed one Israeli man and wounded several others. Both sides said they were ready to stage wider assaults, threatening to plunge the region into a crisis that could leave stalled talks over Palestinian statehood in tatters.

and our 2 mis-leaders give their silent approval because 'israel has the right to' ... do whatever it wants.

obama: no comment on gaza slaughter
from kurt nimmo: Obama no longer has to placate pro-Israel voters, including no shortage of Christian Zionists, so his lack of comment on the premeditated slaughter of Palestinians in Gaza should send us a message - an Obama administration will continue the long-standing U.S. policy of allowing Israel to wantonly kill Palestinians and pay the Israeli government handsomely to do so. In 2008, the U.S. gave $20.27 billion to Israel, more than a 12 percent increase in foreign aid from 2007. In fact, it would seem Obama is dedicated to supporting Israel, no matter how many Palestinians it slaughters or starves. “All of us are concerned about the impact of closed border crossings on Palestinian families. However, we have to understand why Israel is forced to do this,” Obama wrote in a letter to ambassador Khalilzad. “Israel has the right to respond while seeking to minimize any impact on civilians.”

bush refuses to interrupt his final vacation as middle east crisis escalates
from thinkprogress: While Bush has been briefed on the situation by Secretary of State Condoleezza Rice and National Security Adviser Stephen Hadley, he has opted not to interrupt his final vacation as president to make a public statement on the crisis. For someone who has enjoyed the most vacation days as sitting president - including days spent relaxing in comfort during Hurricane Katrina and in the lead-up to 9/11 - it shouldn’t come as a huge surprise that Bush prioritizes vacationing over crisis management.