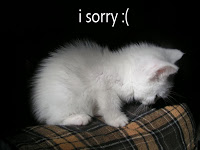 from fresno bee: I know it’s a little early to call, but I’m thinking 2009 is going to be the year of “I screwed up.”

We’ll start right at the top. Our president uttered those words a little more than a week ago when some of his Cabinet appointments took an embarrassing turn. And while President Obama got a lot of fun and furor poked at him by the conservative talk-radio gabbers, I found something earnest and transparent in standing up and saying, “Yeah, my bad.”

And this week? Alex Rodriguez – baseball’s biggest name and the guy who was supposed to cleanly bring the game out of the steroid era – got busted for being on The Juice. What does the ever-sly A-Rod do? Owns up. Apologizes. True, true, he only admitted it once he was caught, a PR ploy for sure. But he’s willing to wear the “I screwed up” tag when Barry Bonds and Roger Clemens aren’t.

Which brings us to Michael Phelps, who went from Olympic hero to High Times with one picture of him hitting a bong with some college kids. Are you surprised? I’m not. Come on, he’s listens to Lil Wayne a lot. And did you see Katie Couric’s interview with Lil Wayne? Wow. But back to Phelps: He also played the “I screwed up” card. “I engaged in behavior which was regrettable and demonstrated bad judgment.”

Exhibit Four: Christian Bale. (Can I just stop here and emphasize how it has been a fun couple of drama-filled weeks). Bale let loose a tirade on the set of his upcoming film, “Terminator Salvation,” dropping something like 37 F-bombs at a lighting guy. Bale, being Batman and all, had to step up and act noble. “I acted like a punk,” he said on Los Angeles radio station KROQ (FM 106.7). “I regret that. … I make no excuses.”

This reminds me of “The Karate Kid,” when young Daniel LaRusso apologizes to girlfriend Elisabeth Shue with the simple, “I’m a jerk.” It worked. And next thing you know, he’s kickin’ Cobra Kai butt at the karate tournament. Are you listening, Chris Brown? Are you listening, lady who gave birth to octuplets?

We Americans are, for the most part, good people. We forgive. Yes, we will absorb every bit of celebrity scandal TMZ will throw at us and every bit of regular-life gone awry that “The Today Show” airs – but at the end of the day, we’ll be OK with “I screwed up.” (Note: This does NOT apply to you, Casey Anthony).

But come on, Nadya Suleman, all we want you to say is, “Yeah, having this many kids probably wasn’t the best idea considering my financial situation. I may have screwed up.” Then we’ll let you go off and negotiate a reality show, “Nadya Plus 14” or whatever.

And Chris Brown, teen heartthrob turned alleged girlfriend beater, a mea culpa wouldn’t hurt your image, either. Note to readers: If you have a problem with anything I’ve said here, e-mail me. My response will be: “I screwed up.”