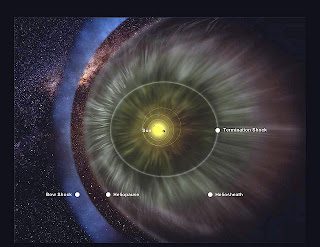 New data from Interstellar Boundary Explorer (IBEX) makes apparent it's a Bow Wave formed ahead of our Heliosphere  as it parts interstellar space.  Our Sun is reported to be traveling at an insufficient speed and magnetic resistance of interstellar space just ahead, is greater than previously known, to create a Bow Shock.  The Sun and its heliosheath instead part the interstellar medium "...much like the wave made by a bow of a boat as it glides through the water," said David McComas IBEX investigator in a Universe Today article.  The Sun travels through the Local Interstellar Cloud at only 52,000 mph down from 59,000 mph previously thought before new IBEX data.  The article also reveals how little is known as McComas concludes,  "it’s too early to say exactly what this new data means for our
heliosphere  Decades of research have explored scenarios
that included a bow shock. That research now has to be redone using the
latest data...."