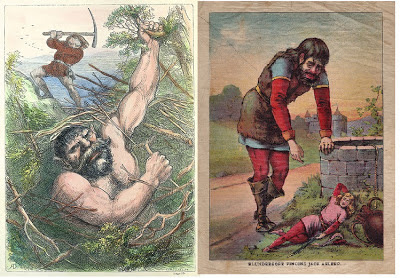 Were there Giants in the World? "Jack the Giant Killer" written by Joseph Jacobs, circa 1898, is a famous English fairy tale.  Geoffrey of Monmouth penned "Brutus and Albion," story of how Britain came to be named after Brutus, circa 1136 AD, also, myth or folklore.  Do stories hint at reality simply no longer believed?    "Jack the Giant Killer" fascinates readers to this day and still influences culture. In the tale, a giant named Thunderdell yells out to an invisible Jack after detecting him by his scent, resulting in famous phrase, "Fee, fi, fo, fum! I smell the blood of an Englishman!" Could there be any more orginal names than Cormoran (picture, left) and Blunderbore (picture, right), two giants slain by Jack in the tale?  You may read wonderfully illustrated story here or listen at your leisure here. You may ask yourself, "why all the fascination with giants?"