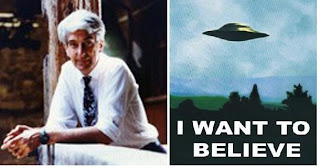 An article by Philip Coppens, "A Missing Pentacle," delves into government's role as gatekeeper. Computer scientist and astronomer, Jacques Vallee discovered in 1967 a secret memorandum, while attempting to organize the UFO files of Dr J Allen Hynek. The two-page memo, dated January 9,1953 and stamped "SECRET," led Vallee to an unsavory conclusion. The US Government used UFO sightings as a tool of psychological warfare. The Pentacle Memorandum, as it became known, was a nickname used by Vallee for the memo's author. A Battelle Memorial Institute memo written by Dr Howard C Cross, was addressed to Miles Goll at Wright Patterson AFB in Ohio. What Vallee found was a reference to screening of, "...what can and what cannot be discussed at the meeting in Washington on January 14-16 concerning our preliminary recommendation to ATIC". The meeting was the Robertson Panel organized in response to numerous UFO sightings in the Washington DC area.

Project Stork seemed to Vallee to be, "...a key determinant in what the panel could discuss – and what not, i.e. what would be kept away from the panel. By preselecting the evidence, the conclusion the scientists would reach could thus be known in advance." Vallee brought the memo to Hynek's attention, who was rebuffed, when he asked Cross for an explanation. "Though the memo never received the impact Vallee thought it would have from a public point of view, the memo did have an important effect on both Hynek and Vallee; both realised that they had been pawns in a game which they never were able to control, if only because both were too timid to shout “conspiracy” from the rooftops."  Vallee said it was main reason he returned to Europe in 1967, he related, "it had shattered his innocence".

The US Government role as a gatekeeper of knowledge allowed to reach the public, and literally, shape the public's reality is evident. Vallee was disillusioned with knowledge waves of UFO sightings were created and managed. You may want to read a previous post, "weapons of mass deception," if you're wondering why? A voice inside your head may be saying, "I Want to Believe"in UFOs and extraterrestrials, but it's somewhat like finding out Santa Claus doesn't exist!