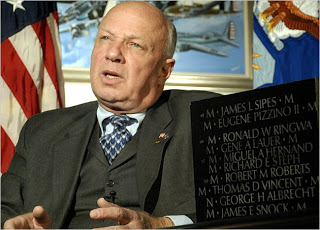 from delaware online: Newark police have identified the body discovered on New Year’s Eve at the Cherry Island Landfill as 66-year-old John P. Wheeler of New Castle. Wheeler, who lived part time in Old New Castle, worked as a defense consultant and had a long and decorated military career that involved working in the Reagan and George W. Bush administrations. Wheeler also served as chairman of the Vietnam Veterans Memorial Fund, which built the wall in Washington, D.C. His death has been ruled a homicide. Newark police have had a crime scene unit at Wheeler’s home at 108 West Third St. in Old New Castle all day today, with crime-scene tape roping off the prominent three-story brick home with black shutters. Friends and neighbors were shocked to learn Wheeler had been murdered. “This is just not the kind of guy who gets murdered,” said Bayard Marin, a Wilmington attorney who represented Wheeler. “This is not the kind of guy you find in a landfill.” Wheeler worked in Washington, D.C. and investigators have determined he was on an Amtrak train from Washington to Wilmington on Tuesday, said Newark police Lt. Mark Farrall. “The last place they can put him is getting off the Amtrak train in Wilmington,” Farrall said.