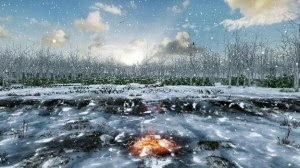 from blog.prehistoricshamanism.com: By Mike Williams: "When we think of ancient astronomy, we probably conjure up visions of Stonehenge, or maybe the Mayan calendar stones, but a new discovery in Scotland has eclipsed these by several thousand years.

Mesolithic hunter-gatherers, living around 10,000 years-ago, constructed a sophisticated calendar at Crathes Castle, in Aberdeenshire, Scotland, which, although dug in 2004, has only now revealed its true secrets after many years of research.

Twelve pits dug into the earth aligned to the lunar progression through the year. They enabled people to determine accurately the moon’s progress by moving a marker post along the arc of pits.

The variable depths of the pits also enabled people to measure the cycle of each lunar month. People arranged the pits in a shallow arc (itself maybe symbolizing the movement of the moon across the sky), with those at one end starting small and shallow, then increasing in diameter and depth towards the middle of the arc, before diminishing in size again at the other end. This arrangement divided each lunar month into three ten day ‘weeks’, representing the waxing moon, the period around the full moon, and the waning moon.

An added level of sophistication was provided by an alignment to the midsummer solstice. The pits overlook a dip in the surrounding hills and the sun rose within this dip each winter. Whilst the sun may have had importance in its own right, the constant alignment at midwinter enabled people to recalibrate their lunar calendar and there is evidence of the pits being recut over many, many years. Indeed, the calendar was in use from around 8,000 BC (the early Mesolithic) to around 4,000 BC (the early Neolithic), and may reveal where people gained the knowledge they needed to create astronomical monuments in the later Neolithic, including Stonehenge.

Whilst the calendar is astonishing by itself, showing the sophistication of early hunter-gatherers, it also reveals that their everyday life may have been a nocturnal rather than a diurnal existence.
The hours of darkness would have been important to a hunting community and the corresponding phases of the moon would have been significant cycles through which people would orientate their activities. The moon also influence the tidal range and this may have been vital for people relying on the sea for their food (as many Mesolithic communities did). By knowing the cycles of the moon, people could predict when the tide would be out and when they should coordinate their gathering.
The taskscape of these people clearly had a cyclicity based on the lunar cycle.

Whether people ascribed a spiritual importance to the moon is difficult to determine but given the size of the calendar at Crathes Castle, it is likely that consulting it was a community event. Perhaps we can even speculate on the existence of shamans – people with special knowledge about the spiritual world – both designing and then operating the calendar. The watching community may have considered the shamans spiritually in tune with the lunar cycle and this raises the possibility that these spiritual practitioners may have been women, with their menstrual cycles adhering to the cycle of the moon.

Whatever rituals took place at Crathes Castle it serves as a reminder that the world of our ancient ancestors may have been very different to our own. Their existence may have been governed, not by the sun, but by the moon with its alternating cycles of light and dark.

The original report is published in Internet Archaeology and can be found by clicking here.