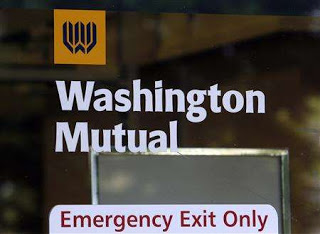 wamu becomes biggest bank to fail in US history
from ap: As the debate over a $700 billion bank bailout rages on in Washington, one of the nation's largest banks — Washington Mutual Inc. — has collapsed under the weight of its enormous bad bets on the mortgage market. The Federal Deposit Insurance Corp. seized WaMu on Thursday, and then sold the thrift's banking assets to JPMorgan Chase & Co. for $1.9 billion.

from washington post: Federal regulators last night seized the massive, troubled mortgage lender Washington Mutual in the largest bank failure in U.S. history, then immediately sold much of the company to J.P. Morgan Chase for $1.9 billion in a deal that will create the largest bank in the country.

The historic two-step was orchestrated by Sheila Bair, chairman of the Federal Deposit Insurance Corp., on terms that preserve Washington Mutual's deposits and avoid what could have been a huge drain on the insurance fund that protects deposits up to $100,000.

The fall of Washington Mutual, which was the country's largest savings and loans, expands once again the vast burned-over district at the heart of the financial industry. The federal government has seized mortgage-financiers Fannie Mae and Freddie Mac and insurance giant American International Group. The five largest independent investment banks are closed or have changed their business model. Most of the largest mortgage companies are closed or sold. This is the first time, however, that a large bank funded mostly by deposits has failed during the current crisis.

The sale furthers the consolidation of the U.S. financial industry, which is increasingly dominated by a few colossal banks with more than $1 trillion in assets, offering a vast range of services. J.P. Morgan will become the largest, surpassing Bank of America.

flashback: my bank is about to fail. how about yours? & wamu gets $7b infusion, cuts jobs, sees big loss