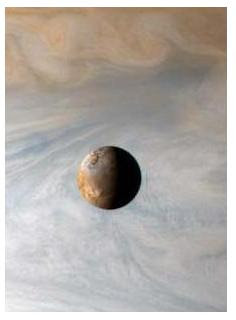 Scientists are excited about possibility of life in outer reaches of solar system. Three moons attract much interest: Europa, Titan and Enceladus previously covered here. Europa with its global-wide ocean hidden beneath a frozen shell of ice. Titan with an appearance similar to Earth once below the clouds obscuring it. Enceladus, a small Saturn moon, attractive with visible geysers near its south pole. Some scientists argue that Jupiter's moon Io (pictured) deserves attention as possibly harboring extreme life forms! Io is the fourth largest moon in the solar system and closest to Jupiter of the four large Galilean moons. An article at The Daily Galaxy, "Jupiter's Io - Volcanic Hotpsot of the Solar System," reveals a moon with an incredible amount of volcanic activity a "...global magma ocean about 30 to 50 kilometers (20 to 30 miles) beneath Io's crust [that] helps explain the moon's activity... The energy for the volcanic activity comes from the squeezing and stretching of the moon by Jupiter's gravity as Io orbits the largest planet in the solar system..." Io's high volcanic activity,  the possibility of protection provided by lava tubes below its surface, give scientists hope for life there. Life in the fiery depths of Io would likely be different and an extreme form. The search will continue for life--and extreme life! Io pictured with Jupiter behind it - just spectacular!