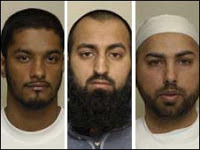 from bbc: The jury in the trial of three men accused of helping the 7 July London bombers has failed to reach a verdict. The Kingston Crown Court jury had spent three weeks considering a charge of conspiracy to cause an explosion.

lost mi5 fax could have stopped 7/7
from daily mail: A chance to stop the 7/7 bombers may have been missed when a secret services fax to police went missing. A damning report is expected to reveal that the MI5 document, sent to West Yorkshire police, raised suspicions about ringleader Mohammed Sidique Khan and accomplice Shehzad Tanweer.