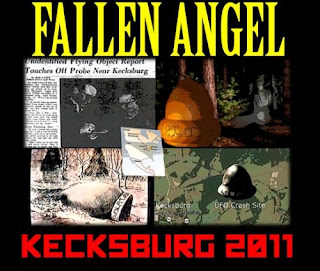 The 1965 Kecksburg UFO sighting remains one of the top incidents in history. Clyde Lewis writes nice summary of the Kecksburg Acorn "FALLEN ANGEL CASE: KECKSBURG 2011," asking all the right questions. Lewis sees a possible connection to 1947 Roswell craft, sent to Wright Patterson AFB in Ohio and the Kecksburg, PA incident. The Kecksburg UFO with " hierogylphs" on its base, was  hauled away on a flatbed truck in a matter of hours after the late afternoon crash of December 9. A truck driver reported, two years later, a large delivery of ceramic bricks to Wright Patterson, where he saw "the acorn" and left with impression bricks were meant to entomb the object. John Murphy, news director at nearby WHJB, was one of first to reach the site and produced a documentary, "Object in the Woods."

Murphy received a visit by two "Men in Black," just prior to airing and never seemed the same to coworkers. A highly edited version of the documentary was only televised. The newsman grew despondent and reluctant to speak of the incident.  By February 1969, Murphy was dead, killed by a hit and run driver while on vacation. Men in Black, had also, been on hand shortly after the crash to turn people away. John Murphy's fate remains one of the most shocking and sinister aspects of the incident.

The Kecksburg Acorn dismissed, at times, as re-entry of a acorn-shaped  Russian satellite, Cosmos 96  The Russian angle would help account for unreadable writing on the UFO.  Other sources contend Russian satellite re-entered hours earlier in Canada. Lewis includes reference to Victor Schauberger, Nazi-era German scientist, who felt descriptions like the acorn were his repulsine design.

Clyde Lewis interview of Stan Gordon, a four decade researcher, adds invaluable perspective to the Kecksburg incident. A previous entry provides additional information on 1965 sighting.You'll need to listen to Clyde's interview of Gordon to get the reptilian angle! It's good stuff!