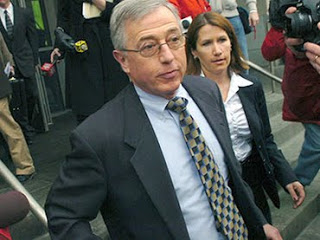 ‘kids for cash’ judge only gets 28yr jail sentence

from raw replay: A former Pennsylvania judge who rendered guilty verdicts in exchange for over $1 million in kickbacks from a for-profit youth rehabilitation center will spend up to 28 years in prison, following his sentencing hearing last Thursday. Over the weekend, CNN sat down with the mother of one of his victims, a young man who was so distraught by his unjust incarceration that he committed suicide. “It’s justice in the sense that he is going to pay for what we’ve been dealing with for the last eight years,” Sandy Fonzo, the boy’s mother, told the network. “True justice, I don’t think there could ever be. He’ll never live the sentence that I live.” This video is from CNN, broadcast Sunday, August 14, 2011.