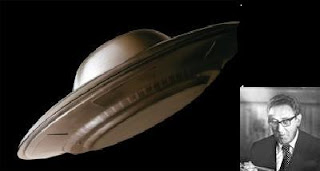 A recent article at UFO Digest, "Dr. Henry Kissinger's UFO Role Revealed," quotes wife of late Dr Eric Wang, who reverse engineered UFOs at Kirtland AFB, NM before his death in 1960. "He [Kissinger] is deeply involved in the Flying Saucer Program...In fact, he was completely in charge," revealed Mrs. Wang in 1984. Tony Brunt, a New Zealand UFO researcher, writing in Part 4 of a series of small ebooks, (.pdf download), "Secret History And Why Barack Obama Must End It," is the very readable source--a must read! Who was Henry Kissinger performing duties on behalf of? It's likely, Kissinger played a top intelligence role. Was it primarily to place Paperclip Scientists? Was it to devise a strategy for dealing with extraterrestrial threat? Was it mainly a psychological operation?

A few articles worth your time are William Cooper's "Majestic-12 and Secret Government". There's also an entity called  PI-40 to consider and Kissinger's role as "PI-40's Master Strategist". Kissinger may have worn all these hats? A deeper drilling into interlaced issues of UFOs, reverse engineering, and ET, reveals obfuscation that may be little more than a psyop?