from willamette week: Two local channels have been called out for Rogue-ish behavior by a national media watchdog for airing promotional videos—sometimes masked as news—during news broadcasts.

A report released last week by the Wisconsin-based nonprofit Center for Media and Democracy and Free Press listed KPTV-12 and KOIN-6 among 46 stations nationwide that the center claims use videos created by corporations for advertising purposes in their news segments.

Known as VNRs (video news releases), these clips even get passed off by some stations as their own reportage. 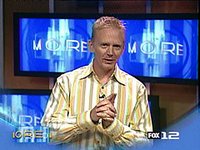 And that's just wrong, says Dan Price, co-author of the center's report. (To get a sense of the debate this touches off among local TV types about VNRs filling air time for small news staffs and other issues, check out oregon media insiders)

'Everyone has the right to know who's seeking to persuade them,' Price says. 'VNRs are corporate advertising in the false guise of independent, objective journalism.'

In the most egregious local example, the KPTV lifestyle show More Good Day Oregon aired a promotional clip, pitched as a news piece, about the sleep aid Rescue Sleep. In the program's 'Need to Know' segment on Sept. 15, anchor Andy Carson told viewers that Rescue Sleep is a 'natural alternative' and has 'no side effects,' adding that 'its biggest benefit is that Jennifer Aniston takes it...so it must be good.'

What Carson didn't mention was that the clip was a VNR made by a production company for Rescue Sleep—or that the spray, which is squirted on the tongue, contains 27 percent alcohol (no wonder it helps you sleep).

KPTV did not return calls seeking comment. (The clip can be seen here.)

Another VNR turned up on KOIN during a piece about identity theft and computers early last month on a 5 am newscast. (The clip can be seen here.)

While the story was reported by anchor Lynn Huston, part of the segment came from a VNR called a 'New Type of Kidnapping,' made by security software company Computer Associates.

Although the software is unmentioned in the piece, Price says the 'report' is still ethically murky.

'In these video news releases, it's still a story being told by people with motivated interests,' Price says. 'None of these VNRs are objective—they're telling a one-sided story.'

Huston and news director Jeff Alan say they didn't know the clip was a VNR when they got it from Pathfire, a video distribution company operated by CNN. Pathfire carries both actual news bits as well as VNRs. While most VNR videos are labeled, this clip, they say, was not.

Nonetheless, Alan defends their use of the VNR footage.

'We merely used a couple of pieces of video and a sound bite from a victim of computer identity theft,' Alan says. 'We didn't use anything to do with the commercial aspect of it.'

He adds that the real problem isn't TV stations, but the companies who create VNRs and try to make them look like credible news clips.

'There are really tricky ways these companies find to get their stuff on the air,' says Alan. 'We have to be detectives half the time.'