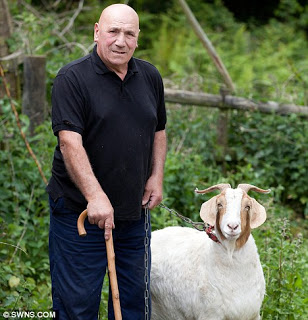 from daily mail: Four goats have been cruelly slaughtered in a village, raising fears of ‘satanic rituals’. The animals were killed within a few days of each other, either with their heads twisted backwards or their throats cut. The horned goat is a symbol in the occult, intended to mock the image of Jesus as the ‘lamb’ who died for Man’s sins, after a reference in the Bible to the obedient sheep being separated from the unruly, non-believing goats. Retired farmer Jimmy Small, 66, who lost two of his goats to the killer in Tipton St John, Devon, said: ‘The whole village is up in arms over what is happening... Everyone is talking about it and locals are keeping their eyes open. I recognise it could have something to do with the occult. What sort of people could do this?’ Mr Small lives alone and had kept his goats, Blacky and Anita, as pets for about seven years.