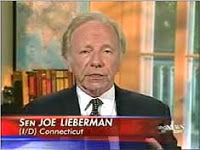 lieberman calls for wider use of surveillance cameras

from the hill: Sen. Joe Lieberman (D-Conn.), the chairman of the Senate Committee on Homeland Security and Governmental Affairs, said Sunday he wants to “more widely” use surveillance cameras across the country.

“The Brits have got something smart going in England, and it was part of why I believe they were able to so quickly apprehend suspects in the terrorist acts over the weekend, and that is they have cameras all over London and other of their major cities,” Lieberman said.

“I think it’s just common sense to do that here much more widely,” he added. “And of course, we can do it without compromising anybody’s real privacy.”

Lieberman lamented the “petty, partisan fighting” in Congress and called on his colleagues to join together to upgrade the nation’s electronic surveillance capabilities.

“Right now, we’re at a partisan gridlock over the question of whether the American government can listen into conversations or follow e-mail trails of non-American citizen,” he said on ABC’s This Week with George Stephanopoulos. “That’s wrong. We’ve got to solve that problem, pass a law to give the people working for us the ability to protect us.”

Lieberman, who is more closely aligned with the GOP than the Democrats he caucuses with on the war in Iraq and many national security issues and insisted Sunday that the surge in Iraq is working.

“You might say that, in Iraq, we’ve got the enemy on the run, but for some reason, in Washington, a lot of politicians are on the run to order a retreat by our troops even as they are beginning to succeed,” he said.

Lieberman stated it is not fair to conclude that he is more likely to endorse a Republican for president.

But he added that “so far I would say that Democratic candidates, in the larger questions of American security, have been disappointing, and I hope things will get better as this goes on.”