life in the outer solar system 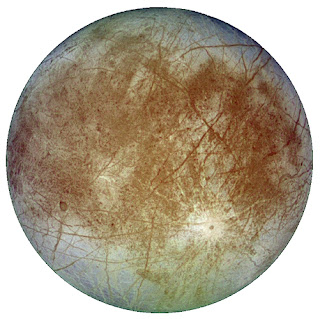 Europa seems high on a short list of worlds to explore. The Jovian moon has a global-wide ocean underneath a surface of solid ice, the prospect of finding life seems promising. Mark Elowitz's Europa Exobiology page provides excellent pictures and even suggests an explanation for the reddish spots, which may be warmer ice rising near the surface? There are practice sessions already underway for a possible Europa mission as revealed in Space.com article, "Antarctic Diving Robot Practices for Europa Mission". Europa, slightly smaller than the Moon, is not the only moon in the outer solar system to draw attention.

In a recent Universe Today article, "A Tale of Three Moons: Is There Life in the Outer Solar System?", Paul Scott Anderson writes about Enceladus, a small icy moon of Saturn, previously thought unlikely to harbor life, "but then Cassini saw the geysers, plumes of material erupting from the south polar region through large, warmer cracks nicknamed “tiger stripes.” Cassini has now flown directly through the geysers, analyzing their composition, which is mostly water vapor, ice particles, salts and organics. The latest analysis based on the Cassini data indicates that they almost certainly originate from a sea or ocean of liquid water below the surface. Warm, salty water loaded with organics; could Enceladus be another possible niche for extraterrestrial life? As with Europa, only further missions will be able to answer these questions, but the possibilities are exciting."

Titan, Saturn's largest moon, long perceived as too cold to sustain life is receiving renewed interest. Once, the Cassini lander probe Huygens dropped below cloud cover, Anderson writes, "Titan is like an eerily alien version of Earth, with rain, rivers, lakes and seas, but being far too cold for liquid water (not much heat here), its “water cycle” is composed of liquid methane/ethane. Appearance-wise, the surface and geology look amazingly Earth-like..." Scientists have considered whether methane-based life exists on Titan? "Future proposed missions for Titan include a floating probe to land in one of the lakes and a balloon to soar over the landscape, pursuing such mysteries as never before. How cool is that?", writes Anderson. It is pretty cool!