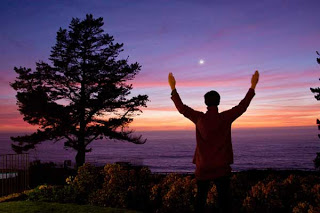 from religionnews.com: Perched atop the rugged splendor of the California coast south of Monterey, the Esalen Institute is the mother church for people who call themselves “spiritual but not religious." Over the last five decades, hundreds of thousands of seekers have come to this incubator of East-meets-West spirituality looking for news ways to bring together body, mind, psyche and soul But today, as this iconic hot springs spa and retreat center celebrates its 50th birthday, a bitter dispute has broken out over its future. Like the many “seminarians” who come here after losing a spouse or a job, Esalen now faces its own midlife crisis. The institute was founded in 1962 by two charismatic Stanford University graduates, Michael Murphy and Richard Price. Murphy (whose family owned a funky hot springs motel at Big Sur) and Price (the scion of a wealthy Chicago family) were looking to start something new. Murphy had already been to India in search of spiritual truth, and Price was looking for a more humane approach to helping people suffering from mental illness, himself included. Big Sur was already known in the 1950s as a mecca for beatniks and other bohemians, and Esalen continued that countercultural tradition into the 1960s and 1970s. People came here to study yoga, meditation, and massage; to take psychedelic drugs; and to scream, cry and/or laugh their way through encounter groups with a series of avant-garde psychotherapists and other self-styled prophets of the New Age. Much to the dismay of Murphy, who was the institute's more intellectual co-founder, Esalen became infamous for hedonistic seminarians who to this day frolic buck naked at the co-ed baths, where outdoor massage tables overlook stone pools -- all of it precariously hung over the left-leaning edge of the American continent. David Price, the son of the late Richard Price and a former general manager of the institute, is one of many Esalen veterans who complain that the place has lost its edge. Others point to upgraded rooms in which a spiritual seeker can spend up to $1,595 for a weekend workshop. Standard rooms, with two or three people sharing a room and bath, cost $730 per person for the weekend. What began with a burst of hippie idealism, they say, is turning into a spa for the 1 percent. There’s even some talk of an “Occupy Esalen” protest.