living in a radioactive world: c.h.u.d. 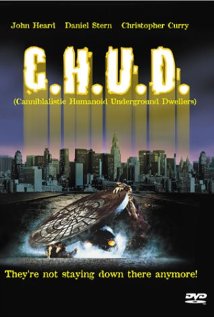 Is predictive programming as significant as so often stressed? Alan Watt gives a concise view of role played by predictive programming and its recognized importance since the time of Plato. Watt also makes clear Hollywood's (the Magus' holy wood) primary role in the process. A review of C.H.U.D., a 1984 B-grade flick, seems prophetic - or just predictive - when its storyline of corrupt officials who dispose of radioactive waste in a clandestine program dubbed, "Contamination Hazard Underground Disposal," seems uncomfortably close to our present reality!

Wayne Madsen adds several new tie-ins to our nuclear dilemma in a recent Opinion Maker article. Madsen just blows readers away in an expose of dark world of black ops and nuclear smuggling, which ties the death of CIA asset Roland "Tony" Carnaby on the streets of Houston, TX in 2008 to the movement of plutonium out of the United States. The Opinion Maker article describes Israel's need to ramp up old smuggling networks, as a result, of an equipment failure at their Dimona facility in the 1990s. Israel located target by tapping US government networks through AMDOCS, an Israeli communications company. The Pantex nuclear facility near Amarillo possesses high grade plutonium, which Israeli smugglers trucked and shipped out through the Port of Houston.

Carnaby determined through video surveillance of the port, the Israeli operation shipped more than needed to replace Dimona's lost production. The Israelis were selling plutonium on the black market to Japan! Japan discovered, in turn, they were stiffed by paying top dollar for old plutonium, which provided them with only short-lived nuclear weapons! The Japanese planned on blowing the whistle, but Israel and the United States set Stuxnet to work that resulted in Fukushima disaster! Wow! C.H.U.D. made viewers familiar with high corruption and an expectation of nuclear crimes with radioactive fallout!