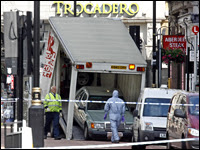 from npr: Police defused a car bomb in the busy Haymarket area of central London on Friday, and the new government called an emergency meeting of senior security chiefs to investigate what many feared could have been a planned terror attack.

At a news conference in London, Peter Clarke, a deputy assistant for communications at Scotland Yard, said the vehicle contained a significant amount of fuel, gas canisters and nails.

About 1 a.m. London time an ambulance was called to the popular "Tiger, Tiger" nightclub to tend to an ill person. The car was discovered when the ambulance crew then noticed smoke coming from the vehicle, Clarke said.

A bomb squad was then called to the scene and manually disabled the device, he said.

Authorities were pouring through a "huge amount of CCTV [security]" video, Clarke said.

"If the device had detonated, there could have been significant loss of life," he said, adding later that the number of dead could have been "certainly in the hundreds."

Clarke said it was too early to speculate on who might be responsible, but authorities "are keeping an entirely open mind."

Prime Minister Gordon Brown, who took office on Wednesday, said the incident was a reminder that Britain faces "a serious and continuous threat" and the "need to be alert."

"I will stress to the Cabinet that the vigilance must be maintained over the next few days," Brown said.

The incident comes a week before the second anniversary of the July 7 London bombings, when four British Muslim suicide bombers killed themselves and 52 bus and subway passengers.

For more than a year, the government has held the country's terrorist threat level at severe - which means a terrorist attack is highly likely.

The Haymarket is the site of restaurants, bars, a cinema complex and, most famously, theaters. On a Thursday night, the area would have been buzzing with crowds of people. The broad street links Piccadilly Circus in the north to the Pall Mall at its southern end.

Forensic officers in white suits were examining a silver sedan and had placed a blue tent-like cover over the rear of the vehicle, which was parked outside an American Express foreign exchange office.

Sky News broadcast a photograph of the vehicle taken early in the morning, showing a green canister beside the car and the backseat door open with blankets spilling out.

The station cited witnesses as saying doormen from a nearby nightclub had reported that someone had crashed a Mercedes sedan into garbage bins and ran away.

The area around the vehicle was cordoned off as a precaution on Friday morning. London transport officials said the Piccadilly Circus underground train station was closed.