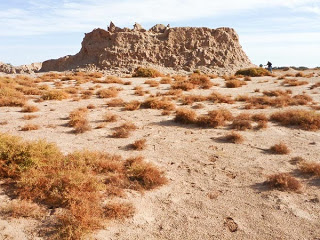 from news.nationalgeographic.com: Real-life "castles in the sand" made by an ancient culture have been revealed in the Sahara, archaeologists say. New satellite photographs show more than a hundred fortress settlements from a "lost" civilization in southwestern Libya.

The communities, which date to between about A.D. 1 and 500, belonged to an advanced but mysterious people called the Garamantes, who ruled from roughly the second century B.C. to the seventh century A.D. Researchers uncovered the Garamantes' walled towns, villages, and farms after poring over modern satellite images—including high-resolution pictures used by the oil industry—as well as aerial photos taken during the 1950s and 1960s. Located about 620 miles (1,000 kilometers) south of Tripoli, the fortresses were confirmed based on Garamantes pottery samples collected during an early-2011 expedition. That field trip was cut short by the civil war that would end the 42-year regime of Libyan leader Moammar Gadhafi.

"We were astonished to see the level of preservation" of the ancient mud-brick compounds, said project leader David Mattingly, of the U.K.'s University of Leicester.
"Although the walls of these sites have slumped a little bit, mainly due to wind erosion, they are still standing 3 to 4 meters [10 to 13 feet] high in places," he said.

Archaeologists could have easily mistaken the well-planned, straight-line construction for Roman frontier forts of similar design, Mattingly observed.
"But, actually, this is beyond the frontiers of the Roman Empire—these sites are markers of a powerful native African kingdom," he said. What's more, the scientists were surprised that the sites—which include cemeteries and agricultural fields—are so tightly clustered.

Previous knowledge of the Garamantes is based mainly on excavations at their capital, Jarma, some 125 miles (200 kilometers) to the northwest, as well as on ancient Roman and Greek texts.

"We've built up a picture of them as being a very sophisticated, high-level civilization," Mattingly said.
"They've got metallurgy, very high-quality textiles, a writing system ... those sorts of markers that would say this is an organized, state-level society," he said.

Cash-strapped heritage authorities in Libya have been unable to conduct field research, leaving a gap in knowledge of the ancient civilization, according to University of Oxford archaeologist Philip Kenrick, who was not involved in the new research.

That's why Mattingly and his team—aided by a $3.4-million grant from the E.U.'s European Research Council—have "been breaking new ground on an unprecedented scale," Kenrick said.