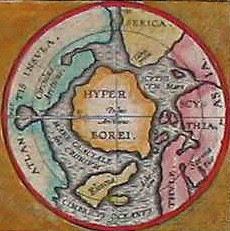 Paul McGuire, whose belief God resides outside of time and space, makes it easy to offer supposition in recent article, “LUCIFERIAN ELITE, MULTI-DIMEN- SIONAL WEAPONS, HYPERBOREA, AMERICA AND THE END OF DAYS,” there’s a direct link from earliest of civilizations:  Hyperborea, Atlantis and Thule to present “End Times.” A linear descent of civilization, contained in article, makes for a fascinating read. A highly popular New Dawn article, “Hyperborea & the Quest for Mystical Enlighten- ment,” provides additional survey of civilization’s earliest beginnings, knowledge surviving only as folklore or myth, today.  McGuire writes, often, in his work about Nazi lore, which represents a recent example of occult belief in unleashing supernatural forces:

“The Nazi concept of a Vril force is based on the idea that a race of god men came from the stars in ships powered by this force and settled on the legendary island of Thule where they founded the civilization called Hyperborea. Plato believed in the Egyptian legend of Atlantis and Herodotus spoke of the another Egyptian legend of the continent of Hyperborea in the far north. When an ice age supposedly destroyed Hyperborea, this race of god men migrated south and it may be they who created the empire of Atlantis.”

“In 1871, British novelist Edward Bulwer-Lytton, in The Coming Race [pdf], described a superior race called the Vril-ya, who lived underground and planned to rule the Earth with the Vril force or psychokinetic energy. They may have been the descendants of the Hyperborean’s, inhabitants of the island of Thule. The Hyperborean’s supposedly harnessed the power of Vril, in order to become a race of supermen who will rule the world.”

Megalomania behind concept of racial supermen gets explored and exposed by McGuire. The present writer suspects it represents delusional thinking – an intoxification of the mind. The descent of supermen crosses paths, of course, with philosopher Friedrich Nietzsche – who did lose his mind. McGuire reveals an advancing insanity below:

“The German philosopher Friedrich Nietzsche (1844-1900) wrote of the Übermensch (superman) in his work, Der Antichrist (The Antichrist.) Nietzsche wrote ‘Let us see ourselves for what we are. We are Hyperborean’s. We know well enough how we are living off that track.’ When Nietzsche published ‘The Will to Power’ he was speaking of the Vril force and spoke of “the herd,” meaning the ordinary people who try to abide by the moral laws given to us by God. In contrast Nietzsche spoke of the supermen who tap into a supernatural force that raises them above the ordinary man Due to the elite nature of the supermen they are justified in lying to the herd in order to remain free and independent of the ‘herd mentality’.”

Zbiginiew Brzezinski, is identified by McGuire, as a recent proponent to this lineage of “thought” or madness:

“Our current leaders, who are ultimately ruled by the Luciferian elite, have called for a reduction of the world’s population from seven billion to five hundred million and they specifically use the term ‘culling the herd.’ They see themselves as the god men who will rule the world. They are above what they believe are archaic concepts such as right and wrong. Thus, it is perfectly acceptable for them to lie to us, the masses of the herd. Read what Zbiginiew Brzezinski, adviser to five U.S. Presidents and Executive Director of the Trilateral Commission wrote:

‘The Technocratic era involves the gradual appearance of a more controlled society. Such a society would be dominated by an elite, unrestrained by traditional values.'”

The occult agenda represented by Theosophist philosophy and writings of Madame Blavatsky call for the eradication of Christians. McGuire identifies threat:

“The current plans for global government are designed by a Luciferian elite who want to remove all true Christians from planet Earth. This is what the Russian occult teacher Madame Blavatsky called a great cleansing of the Earth. Blavatsky influenced Hitler and continues to have an enormous influence on the UN through her disciple Alice Bailey, who founded Lucifer Publishing on the grounds of the UN; its name was later changed to Lucis Publishing. At the very top this Luciferian elite is in direct communication with Lucifer and they are using supernatural power to control the Earth.”

The present writer suspects “agenda to remove all true Christians,”  remains important, because a spiritual center will remain eternally untouchable and superior to any individual enlightenment proposed by Theosophy.  In the end, Theosophy seems reductionist and susceptible to degeneration into a two-dimensional, material existence.

McGuire fears our present playing field uneven and hopes Christians can rise to the occasion.  A call is made by writer for everyone to seek out and gain spiritual weapons necessary to wage a spiritual war:  “The problem is that the average person today has no idea
how powerful these spiritual weapons are. Conversely, the Luciferian
Elite are fully aware of the nature and power of spiritual weapons…In the time period we are now entering, known as the ‘end of days,’ the nature of reality as we know it is being radically changed. Our job is to learn how to navigate within it.”  There’s the task ahead of us.  The present writer, formerly a strict materialist, has witnessed enough to be convinced, we’re indeed in no less than a spiritual war!